Alfonsina Strada Raced The 1924 Edition of The Giro d'Italia 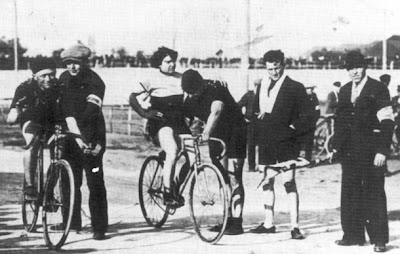 Alfonsina Strada(on the right) at the starting line of a track race
In 1891 Afonsina Morini, the second of 8 children was born to a family in northern Italy. Alfonsina's family were essentially peasants with the father a day laborer and sharing a hovel with 24 occupants. This was during the time that many people from that part of the country were dying from pellegra, a kind of malnutrition. One day, when she was ten, her father came home upon a most amazing machine. He had traded some chickens to a local doctor in exchange for an old bicycle. She got on it and in a short amount of time was propelling herself up and down the fields, between the beets and the cabbages.
She competed in races against men and women, and in 1911 broke the women's speed record, previously set in 1905. Her hour record stood for 26 years at 37 kilometers per hour (23 mph) and she did it on a 44 pound single geared bike. But her fame and prize winnings did not soften her family's stance against this scandalous behavior; they wanted her to settle down and be a seamstress. They were tired of being the laughingstock of the town. So when a young suitor appeared, they insisted that she marry, settle down and forget all this bicycle nonsense and in 1915, at 24 years old, Alfonsina married Lugi Strada, a metal plater and inventor. Instead of obstructing the passion of his bride , he approved of it and gave her his full backing. To her parents' dismay, her new husband gave her a shiny new bicycle as a wedding present. 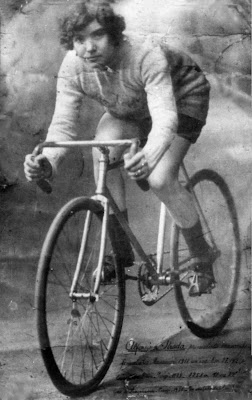 The first major race that she competed in was the 1917 Giro di Lombardia. World War I was still raging, and many important riders were soldiers. So there were not many entrants. The course was 204 Kilometers, with 74 entrants and 32 finishers. Alfonsina finished 32nd.
In 1924 Emilio Colombo, director of the "Gazzetta dello Sport", a newspaper, admitted Alfonsina to the Giro d'Italia. Alfonsina, who was less than 5'2" tall, rode on her men's bike, wearing black shorts and matching socks which showed off her muscular legs. With a smiling and good natured face she began the Giro, the first to this day, the only female athlete to ever participate in this men's only event.
The Foggia-L'Aquila - 7th stage was 304 km, which was bad enough because the southern Italian roads at this time were nearly impassible. They were not paved, and were rocky and icy too. The mountain pass was so terrible that the riders could not get their bikes through the mire and mess on their own and almost all of the participants were towed partway by motorcycles and cars. Alfonsina suffered terribly on this stage. She fell on a descent and had to ride many more hours using her bruised, scraped and swollen knee.
Alfonsina did not finish the next stage, L'Aguila-Perugia, (296km) within the time allowed. That day the weather was terrible. The wind blew and a bitter rain fell. The mantles that the riders wore did little to protect them. At a certain point on the ride, Alfonsina's handlebars broke. She wasted a lot of time looking for something to repair them with. She met a housewife who had a great idea. The woman broke her broom handle in half, and gave it to Alfonsina, who finished the stage with a wooden handlebar. Arriving out of time, she was put out of the race. Emilio Colombo, who understood how good the publicity would be to sponsor the first woman cyclist in history; decided to let her finish the course (unofficially of course), paying out of his pocket for her room and board and masseuse.
She continued the race, observing the same schedule and rules as the rest of the competitors. The ride had 12 stages for a total of 3610 kilometers and concluded with the victory of Giuseppe Enrici. When they left Milan, there were 90 participants, and at the end there were only 30 finishers including Alfonsina.
Her husband died after a long confinement in 1946. She remarried in 1950 to a retired bicyclist who had won many prizes on the track, the giant Carlo Messori. With his help, she continued with her activities until she finally decided to quit competing but did not stop bicycling. She continued to use her bike as a means of transportation. She remained in the biking world because Carlo opened a bike shop with a repair annex. He died in 1957 and Alfonsina continued to care for the house and the repair shop in Milan on Via Varesina where they lived. Every day, to go to work, she rode her old race bike wearing a long pants dress. When she began to feel the advance of age she bought a 500cc Moto Guzzi. To buy this red motorcycle, she had to sell some of her medals and trophies.
She died in 1959 at the age of 68. After she exited the house, a neighbor heard her trying to start the motorcycle unsuccessfully. She looked outside to see Alfonsina pushing angrily on the start pedal. After a bit, the motorcycle slipped out of her hands, and she fell on top of it as if she wanted to hug it. People rushed to her aid, putting her in a car and carrying her to the hospital, where she was dead upon arrival, her heart had stopped. 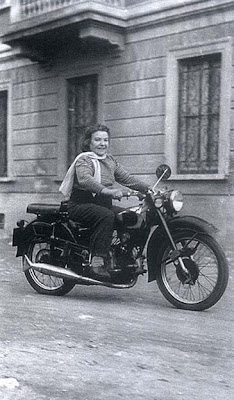 Alfonsina Strada on her Moto Guzzi 500
Posted by Charlie at 2:13 PM