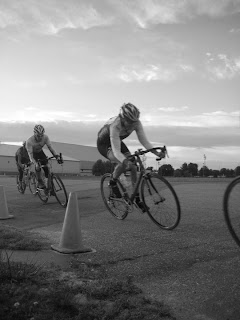 I didn’t even want to race Dixie tonight. After Tour de Moore, I felt like taking a break, maybe do a little Lewisville ride or a 2x20. But Jim, whose day job involves getting people to say “yes,” got me to say yes.

But that’s enough about me (for now). The winner tonight -- indeed, the team's first winner this season -- was Richard Carver. On the Bell Lap of the 4/5 race, the man started dishing out some pain on the backstretch. Meanwhile, Jim and I, watching from the restroom area, pooh-poohed the tactic. “Oh no – too soon,” we said almost simultaneously. But Carver proved the cytomax-sipping spandex pundits wrong. He and a wheel sucker got separation from the pack, increased the lead around the final turn, and then Carver turned on the rockets, flicking Mr. Wheel Sucker and powering solo across the finish line. Chris Gibby topped things off by finishing strong in the pack.

In the ¾ race, the familiar faces were there: Ben, John T., and Joe H. It was a small field of maybe fifteen, and it was windy. A few minutes in, Ben and I tried to break away a few times. We had done it three races ago and figured it might work again. But, unfortunately, nobody wanted to work with us. The pack was intent on riding defensively. Each attack was chased, each acceleration matched. So it all came down to the final laps. The pack was orderly, as if there was an understanding that the wind would not allow anyone to sneak away and that accounts would be settled with a sprint.

This is when having teammates makes racing fun. With three to go, Jim got on the front and set a vicious pace. I mean vicious. It was so authoritative that nobody even thought about trying to bolt off. Meanwhile, I was behind Kevin, who was taking care of business, slotted about four wheels from the front, keeping things together. Cruising into the final turn, we turned the speed up to about 30. Heart pumping. Feeling good. Coming out of the turn, the race dogs bolted out of their cages and gears started popping like distant scatter fire. I poured everything – all those intervals – into my pedals. In a flash, side by side, Ben and I, with no one else in sight, formed the tip of the sword. In another flash, on the line, my bike followed his. Just like that. So close. Yet another second place. But that’s OK. I still got enough prize money for my next entry fee – and a six pack.

PS: The attached photo of tonight's race was sent to me by our esteemed former teammate, Big E. Thanks, E.
Posted by Charlie at 4:08 PM No comments: 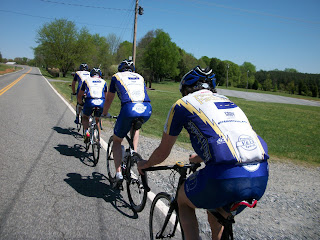 A fun Sunday afternoon "Team" ride in Davidson County in April. Jim, Pat, Chad and Bert in this photo all lined up in their team kits.
Posted by Charlie at 6:50 PM No comments: