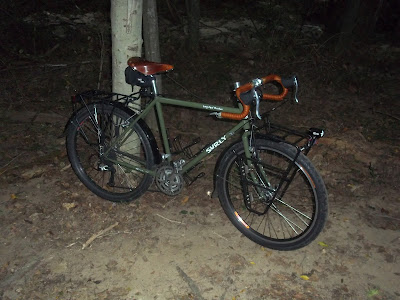 Posted by Charlie at 5:24 AM No comments: 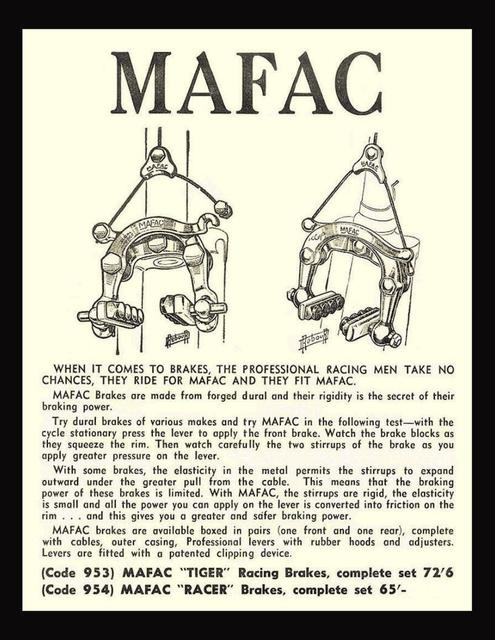 Posted by Charlie at 5:53 AM No comments:

Posted by Charlie at 5:42 AM No comments:

Click on the photo to enlarge it
Posted by Charlie at 9:36 PM No comments: 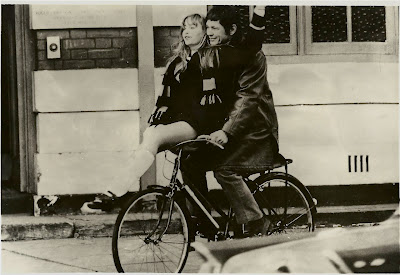 Posted by Charlie at 4:59 AM No comments:

Posted by Charlie at 5:32 AM No comments:

Life Behind Bars - King of the mountain - Episode 7

Posted by Charlie at 7:59 PM No comments: 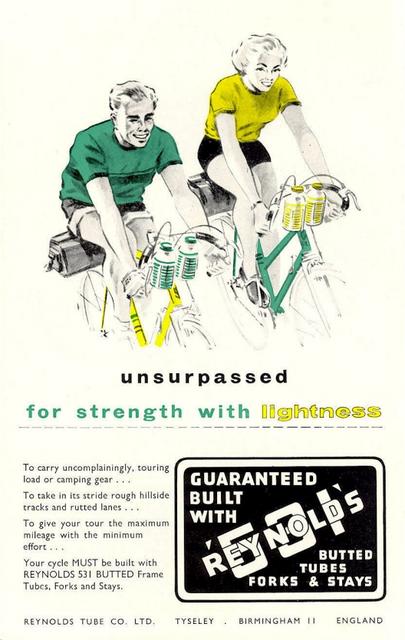 Posted by Charlie at 5:02 AM No comments:

Posted by Charlie at 9:13 PM No comments:

How to change a flat tire

Posted by Charlie at 5:26 AM No comments:

Modern bicycle rims are light, strong and generally very dependable – true the braking surfaces can wear out but that is mostly down to modern abrasive brake materials. It was not always this way… Most top quality and even the middle range rims are designed with a hollow box section and the spoke nipples are fastened through an eyelet that joins both the top and bottom walls of the rim. The box section is essentially a tube – we all understand that a tube can have a much higher strength to weight ratio than a solid section. That is why bicycle frames are made from tubing rather than solid material. Most rims are these days made from aluminium alloy which have quite a high strength, which can approach that of the lower strength steels. Perfectly adequate strength can be built into a rim with really quite thin walls but spokes carry a very high tension which means that the loads into the rim are highly concentrated around each spoke nipple – eyelets which connect the top and lower walls of the rim distribute the stress across the upper and lower walls of the rim.     The first rims to use these principles were introduced as long ago as 1933/4. Very curiously, two patents were taken out within two hours of each other in two different countries with these exact features. In Italy Mario Longhi registered his patent on January 5th just two hours before Mavic in France registered their patent for a virtually identical design. Longhi licensed his patent to Fiamme (hence on early Fiamme rims the words Brevetti Longhi) and very graciously also allowed Mavic to license his patent as, of course, his patent had priority over the Mavic one. But more mystery surrounds the introduction of the rims – the design and actual rims were exhibited in England at the Lightweight Cycle Show in November 1933 two months before the patents were taken out…

Two images of a c1935 Fiamme wired rim showing the steel eyelets from each side of the rim
In the 1930s aluminium alloy bicycle rims were still quite a rarity despite such rims rims being first manufactured in the Edwardian period for luxury roadsters such as Sunbeam and Lea Francis. These bicycle makers were however far less concerned about weight than about appearance – the aluminium did not need plating and kept its shiny appearance for longer. In the late 20s and early 30s aluminium rims made a reappearance – we have looked at Constrictor Conloy rims – these were a pioneering rim using aluminium alloy initially in a solid section and later with a very slight hollow section. These were quite reliable and light but not very stiff.     Mavic’s version of the new design was soon tested in competition in conditions of great secrecy in the 1934 Tour de France by the French star Antonin Magne. His rims were supposedly painted in wood colours to look like the wood rims used by the vast majority of the participants. Wood rims seriously lack stiffness though are reasonably light and also offer a poor braking surface. However, they do insulate the tyre from the heat generated by braking on really long descents. Mavic’s new aluminium rims offered improved braking, were very strong, stiff and lighter than the wood ones.   Fiamme manufactured both wired-on (clincher) and sprint rims for tubular tyres using the design. The rims for wired-on tyres were more of a Westwood section with only a very narrow surface for braking on in the first year. And the eyelets joining the upper and lower walls of the rim were aluminium. By 1935 a squarer section rim for wired-on tyres was introduced alongside the other one and the eyelets were cadmium plated steel because according to the British importer there had been some troubles with the aluminium eyelets – presumably coming loose. Of course it was the sprint rims that the serious racers used. It did not take long for the new aluminium sprint rims to largely take over from the wooden ones for road competition.     Both Mavic and Fiamme exploited the Longhi patent to great effect though Fiamme after WWII dropped the design for wired-on tyres. It was not until 1975 when Mavic introduced the Mavic E narrow section rim for wired-on tyres that the design made much of an impression for non-racers. Now of course solid-section rims are obsolete except on the very cheapest bikes and most also use double eyelets proving just how far ahead of the time Mario Longhi was. Fiamme rimsPre-WarIn England two types of rim for wired-on tyres were offered – the original design in almost Westwood tyre section (as in the photos) and the square design in both 26 x 1/4in and 26 x 1 3/8in sizes. One design of sprint rim with a flat sidewalls and reasonably deep box section was offered. They represented the very latest in technology – then as now – technology did not come cheap they cost around 34/- (£1.70 a pair). A complete cheap bike at the time could be bought for £4.
Post-war

Fiamme offered two designs of sprint rim - the standard rim with squarish box section and eyelets for road use and a lighter narrower rim for track use with steeply angled sides and not really suitable for use with a brake. The rims for wired-on tyres were solid section. Later in the 1970s Fiamme pioneered the use of the higher strength 7000 series aluminium alloys in their Ergal rims which weighed under 280g each.
Right: 50s Fiamme track racing sprint rim with curved sides

Above: a drawing from the 1935 catalogue showing the original Fiamme design of sprint rim for tubular tyres.
Posted by Charlie at 6:43 AM No comments:

Posted by Charlie at 6:27 AM No comments:

A trip to the Giordana Velodrome in Rock Hill, SC

Posted by Charlie at 8:47 PM No comments:


The folks at Paul Component Engineering machine these hubs from three inch round bars of 6061 aluminum. The hub shells are put through four different machining processes before they go to finishing. The front and rear have the same flange widths and diameters for easy wheel building and a perfectly symmetrical set of wheels.

Marinus ("Rini") Wagtmans (born December 26, 1946 in Sint Willebrord) is a former Dutch professional road bicycle racer. He was the nephew of Wout Wagtmans, a former professional who had won the Tour de Romandie stage race in 1952. His father was a masseur while Tour de France stage winner Wim van Est was his neighbour. In 1968 Rini turned professional. The following year he finished third overall in the 1969 Vuelta a Espana. He rode four editions of the Tour de France and won three stages, one in 1970, one in 1971 and one in 1972. In the 1970 Tour de France he finished fifth overall. In 1971 Tour de France while riding for Molteni, he wore the maillot jaune for one day but teammate and team leader Eddy Merckx took the jersey the following day. He also won two stages in the 1970 Vuelta a Espana. Wagtmans was known as one of the best descenders in the peloton and earned him the nickname "witte bles" which is translated as "white blaze". Wagtmans ended his career early due to heart problems. 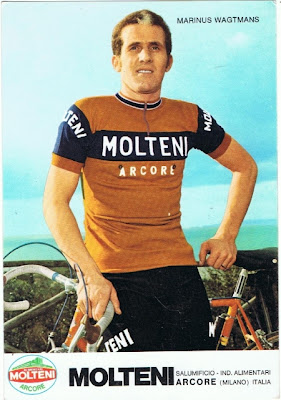 Posted by Charlie at 8:32 PM No comments: Posted by Charlie at 6:23 AM No comments:

Posted by Charlie at 5:55 AM No comments:


Wheels- an original short film from Zachary Grimshaw on Vimeo.
Posted by Charlie at 7:10 PM No comments:

Leon Georget ( 1879 – November) was a racing cyclist from France. He was known as The Father of the Bol d'Or having won the race 9 times between 1903 and 1919 in Paris. He was also nicknamed Big Red, or The Brute.

Posted by Charlie at 9:20 PM No comments:

Posted by Charlie at 6:43 PM No comments:

Click on the photos to enlarge them
Posted by Charlie at 4:15 PM No comments:


The Bol d'Or was a bicycle track race that ran in France between 1894 and 1950. It was a paced, 24 hour endurance event. It has been won by several notable cyclists including Constant Huret (4 times), the Australian Hubert Opperman and three time hour record breaker Oscar Egg. The person with the most wins is Leon Georget (brother of Emile) with nine (including eight in a row).


The race was created on June 23 and 24, 1894 by a Monsieur Decam. It first ran at the Velodrome Buffalo in Paris and was sponsored by Chocolate Meunier.


In the early years riders were paced by tandems or triplets. In 1899 electric tandems were tried and motor (derny) pacing was used in 1950.

The race gets its name from the prize awarded to the winner - a gilded bronze bowl or cup.

Posted by Charlie at 9:46 AM No comments: