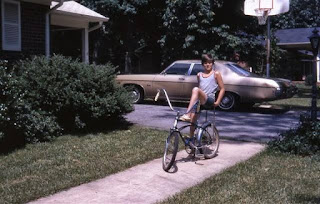 This is me sitting on my first bicycle. Before I got this bicycle I rode one of my sister's hand me down girl's bike for years. This photo was taken in the summer of 1971. My blue and chrome bicycle has many miles on it by now! The car in the background is a 1969 Chevrolet Impala.

I remember running into the den of our house to see what was under the Christmas Tree in 1968. I don't remember anything else that I got that year, but I remember seeing my first bicycle that morning. It was blue with chrome fenders. Despite the fact that it was cold and still early, I had to go outside and ride my new bicycle right then. I bundled up and headed down the road. I didn't go far because my hands and face were freezing. I turned around and rode home as fast as I could. I made the same short trip several more times that morning before we drove to my grandparents house for more Christmas. I was anxious to get back home and go for another ride.

One thing on my new bike that was scary to me was the fact that it had a front hand brake. All of my friends that I showed my new pride and joy to told me the same thing: "If you put on the front brake you will flip over the handlebars." I made sure I never touched the front brake lever for any reason. My father was puzzled by my request to take the brake and lever off of my new bicycle. He tried to convince me that I should leave it on the bicycle and that I would learn to use it. Finally he gave in and took the lever and brake off my new bicycle. I felt much better about the bike then.

My new bicycle was my ticket to freedom. I rode to school every day I possibly could, as did most kids at elementary school in those days. There were two long bike racks that were full of bicycles on both sides everyday.  I never heard of a bicycle being stolen from the bike racks, but I carried a lock with me and locked my bike up every time I rode to school.

The best part of riding to school was that I could go wherever I wanted in the afternoon. I knew it would be okay as long as I didn't break the most important rule in our household: be sitting at the supper table by 5:30 sharp. Don't be late! This made for some fast rides home so that I would be sitting there at the table at 5:30. I remember, on many occasions, pedaling home from a friends house as hard as I could, while I nervously eyed my watch!

One of my favorite destinations was Sherwood Plaza Shopping Center. I rode there on after school adventure rides and on Saturday mornings too. It was a fun place to go and a great destination. Most of the time I didn't have any money to spend, but if I did I would buy Frozen Coke-a Cola and/or bubblegum. Money wasn't necessary to make Sherwood Plaza a fun destination. I would usually see someone I knew once I got there. Riding on the sidewalks in front of the stores was my favorite thing to do (even though I knew I wasn't supposed to). The slick surface of the cement sidewalks made long skid marks easy to do. Sometimes we would have contests on those sidewalks to see who could slide the farthest. I'm sure I was considered a brat to folks trying to walk from store to store, but I still think skid marks are cool!

My blue and chrome bike held up to a lot of use and abuse. It never occurred to me that my riding style might cause it damage. A favorite pastime was building wooden ramps out of scrap lumber and seeing how far I could jump. My goal was to jump the width of a driveway. The rims held up to many attempts and lots of falls. My blue bike also held up to years of riding wheelies and coming down hard on the front wheel.

At one point I added a generator that powered front and rear lights. The generator made it hard to pedal, but I thought it was great! This made it possible for me to ride after dark. During the summer months I could go anywhere I wanted as long as I was home by 10:00 PM. I roamed the neighborhood looking for adventure. There were always other baby boomer children outside to play with. (back in those days parents didn't worry about children being out of their sight like they do now)

Other than a few flat tires from running over something, my blue and chrome bike never broke down. In the basement workshop of our house my father taught me how to take the wheels off and patch the tubes. I successfully patched the tubes many times. Occasionally I would have to replace a tube. Turtle car wax kept the blue metallic paint looking good.

I still ride blue bikes and go on what i call "adventure rides." It's been many years since I saw a bug spraying truck!

Posted by Charlie at 8:43 PM No comments: