This weekend was the UCI sanctioned NC Grand Prix in Hendersonville, NC. The course was at Jackson Park. The course was challenging with a barrier section, a run-up with steps/barriers, single-track style hill with leaves all over it, and the "wall." The "WALL" is a steep hill right out of a corner and off a paved parking lot that is rideable with a lot of speed.

Sirena and I both raced at 10:45AM and Saturday's weather was picture perfect. Sirena's race was a women's CX3-4 and the competition was ramped up for this. I had 61people in my race. I think Sirena had 25+. I got a bad start and had trouble getting clipped in. I had a good opening lap. On the second lap I over-cooked a muddy corner and went down. I regrouped and on the third lap I was passing a junior and called out "on your right." Once I was close to the junior he swerved sideways into me and we both went down on the gravel road. I did a split and the junior landed on my left knee. Needless to say I was hurting. I finished 29th. Sirena hung tough and finished 18th. She had a stacked field and did well.

Sunday's (today's) weather was nasty in Hendersonville. It was cold, rainy, and the course was getting muddy. I was out with my left leg hurting and my knee swollen. Sirena per-rode the course and decided to opt out. She said she didn't have it in her and we packed up and headed for W-S. I think she is somewhat burned out. I have never seen her quit a race before.

Anyway, the last cross race of the fall series is in W-S at Tanglewood Dec 6th.

Chancey
Posted by Chancey at 1:27 PM No comments:

Matt was a freshman at RJR high school who died during his first football game as a Demon. In addition to many other events organized to remember Matt, a 5K seemed a good way to highlight Matt's love of sport and...Krispy Kreme doughnuts.

Jill and I live a stones-throw from RJR High School, and even though I am a Mt. Tabor Spartan through-and-through, we feel a certain attachment to the school in the neighborhood. When we heard of this 5K, we knew we'd do it. To our surprise, the race had a hitch: runners had the option of entering as "challengers" or as "casual." Challengers were required to eat 6 hot'n'nows at the halfway point, then run to the finish. Casual runners were under no such burden.

Jill and I both decided to enter as casual, because as good as KK doughnuts are the first time they pass your lips, we had no interest in seeing if they were as good or better the second time around. This actually happened to MANY who entered as challengers.

To the race: The sun was out, with temps in the upper 50s to low 60s by the start. At the gun, the racers - differentiated only by RED or BLACK numbers on their bibs - took off. With most of the climbing in the first mile, I knew this was where most of the race would be decided. The throngs surged ahead however, and I was pacing well to stay in the top 40.
At the halfway point, every single person ahead of me veered to the left toward the doughnut tables - all challengers. As a casual runner, I could opt for 0 - 5 doughnuts. The challengers started squishing KKs and shoving them in their mouths while chugging water. Before I realized it, I made the turn and was heading back to the start/finish...in 1st place and with no doughnuts in my stomach (or tucked between my gums and cheeks).

This is one of the great thrills of sport, to be in first, even if for only a moment. It is almost confusing, because most of the time we are playing our position off of those around us: listening to breathing, for shifts of gears, for the whoosh-whoosh of someone with carbon wheels standing to pedal...

This glory was short-lived, as by mile 2.5 I was passed by two runners: young whippersnappers who were barely even trying. No one else came by, and when I looked back at mile 3 no one was there.

Coming to the finishing straight, my friend Kristin snapped a shot and it's below. I landed 3rd overall, but as a casual runner, I don't command the respect or admiration (rightly so) of those who slammed down 6 hot doughnuts and ran it on home. The first challenger was only about 1 minute behind me. Impressive! 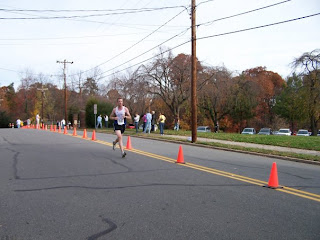 How can a 70 degree day in Mid November get any better? Well, how about 2 & riding for an awesome cause as to remember a fallen cyclist. Today, Chad, Jimmy, Dave, Richard & I participated in the Memorial ride in HP for the Dave who was killed by a motorist in GSO less than a month ago.
I was under the impression it was going to be a "recovery" ride, but when >500 people showed, it quickly apparent that some of the big boys had come to play & show off their Mid-Nov form. (Bert, we needed you!!)
I took my video camera thinking I would be able to practice my skills. I got 2 clips before we left & 1 on the bike (below) before that dang thing became weight I didn't need to be dragging around.
I will never be able to give this ride the credit it deserves nor wax as poetically as Professor Bert, so I'll leave it as this. Here's the video before my eyes started bleeding....
Posted by Tachybrady at 7:26 PM No comments:

Saturday, November 14 was an epic day.
First, when does one get a 70 degree day in Mid-Nov?
Secondly, how often does one have sag support for a team training ride? (Thanks Lisa)
Bert, CHad, Kevin, Jimmy, John O'Leary & myself had all of the above & more yesterday. It was awesome. As Bert has stated in the post ride email, I had one of my best days ever. (losing 17ish lbs makes a difference going up any hill, much less trying to stay on O'Leary's wheel) Bert's new power meter is helping him go to new heights(no pun intended) but it's not helping his calves any. Jimmy had been hooked up to an IV just 24hrs prior to the ride & made it. (Jimmy, you know the pro's have stuff put INTO them, not taken out) Chad's diesel was firing on all cylinders & Kevin never seems to have a lull in his riding. Kev, thanks for the encourgement.
Good weather, good friends & a safe ride, what could be better?
Lisa took a couple of videos from the car & I'm attempting to attach.
Posted by Tachybrady at 8:15 AM No comments:

Today was the cross race at Salisbury Community Park. It was HOT! The course was fast and roadie-friendly. Team members Charlie, Danny, Sirena, and myself raced. The course was relatively flat and two woods sections and two barrier sections.

Sirena raced the women's CX4 race and had 15+ in her group. She got a good start and was 4-5th after one lap. She had a tough second lap but regrouped after that. She begab reeling people in and in typical Sirena-style was mashing on the pedals in the bigring. With two laps to go she was 4th. With one to go she was in sight of 3rd. She closed in on 3rd but ran out of time at the line. Sirena finished a strong 4th and is riding well.

I did the men's CX4 race. There were 50 racers in my group. It was HOT and I started near the back. I got a good start and was midpack after one lap. I had moved up to the top 20 after two laps. My side-stitch flared up again and was troublesome the last two laps. With one lap to go I was ~15th (per Sirena). On a nasty 180-degree off-camber corner I lost it and hit the deck. I lost two spots but remounted quickly. On the last lap I caught a few more people and finished 13th.

It was painful and fun!
Posted by Chancey at 7:38 PM No comments:

The third race of the NC Cyclocross Fall Series was this Sunday in Boone, NC at Hawsnest Ski Resort. Literally, it is at an old golf course and you are racing on the side of the moutain. It was typical Boone weather...cold, misty, foggy, and there was MUD EVERYWHERE. It had rained for two straight days and I have never seen anything as muddy as this. Picture any video clip of the Oregon cross scene and you would have this race. The course was very challening and then throw in the mud and you have a race of survival. The course had long straights with deep mud and standing water. There were a lot of short step hills, an off-camber hill that was not really rideable, and a run-up that was very muddy and slick. There was one barriers section, a sand pit, and lots of fans screaming at you when you didn't make it up the hill.

Sirena raced the women's CX4 race and had around 15 racers (I think). She got the hole shot and held it to the barriers. However, she came into the barriers with too much speed and hit the deck dismounting. She regrouped and was 8th after the first lap. She reeled in racers and had moved up to 4th entering the last lap. Sirena was able to ride many of the muddy areas others weren't. The course was very much a power course. On the final run-up she had moved to 3rd. Coming down the final straight she could see 2nd but the ugly, thick mud reared up and snagged her. She crossed the line 4th!

I raced the men's CX4 and we went last. The course was torn up by then and the mud was getting worse. There were around 35+ racers in my group. I lined up near the back and got a bad start. A couple of racers went down in front of me and I had to dismount and run the first straight. I had a good opening lap and had moved up to around 20th. On the second lap I began to notice mud collecting on my brakes/wheels/tires. I had really bad tires for muddy conditions. They are knobby and collect mud. At the start of the final lap I had to stop twice to clean off mud from my wheels. Entering the final lap I had moved up to 15th. I had to stop again and 3-5 racers passed me. I was having a real hard time getting clipped in as well. Coming down the last straight my bike LOCKED UP! I could not pedal it. I had to get off my bike and run/walk to the finish line. Travis from Clemmons Bike Shop passed me! We have good battles in cross and he got me today. I have never ridden in anything like that!

Chancey
Posted by Chancey at 8:30 PM No comments: