Sirena and I went to the US Pro Championships in Greenville, SC this past Sunday (Aug 30). It was a blast! We got to see George Hincapie win his 3rd national road champioship. It was pretty cool that it was in his adopted hometown of Greenville. We did the VIP viewing at the start/finish at if you ever go to a national cycling event it is the way to go. We had a covered tent with chairs, a flat screen tv to watch the race, lunch, beverages, etc. It was great to be at able to get to the start/finish line at watch Hincapie, DZ, the Gramin squad, Floyd Landis and the Ouch team, RockRacing, team BMC, Kelly Benefits Strategies, etc. Team Mtn Kyakis was there (minus Mark though).

We did the Stars and Stripes charity ride (presented by P3 to raise $ for the Lance Armstrong Foundation) early Sunday morning before the pro race. We got to ride the same course as the pros and did Paris Mtn. The course was 22 miles long. There were around 500 charity riders on the course. Sirena and I had no idea what to expect of Paris Mtn but it wasn't that bad. Paris Mtn was around 2 miles long (maybe more?) but it isn't nearly as bad as any of the mountains around here. It is only steep at the top. We had a blast and would do it again in a heartbeat.

USA cycling announced at the race that the US Pro Championships will be in Greenville, SC again next year!
Posted by Chancey at 12:00 PM No comments:

For the second consecutive Monday night ride we lost Dwayne Henderson. Has anyone seen Dwayne? He vanished with Dr. Rob this time.. He is wire thin, about 6'2'' tall and weighs around 160-170lbs. He is a climbing machine last seen wearing a paceline kit. He has been known to donn extremely tight cycletherapy bibs. Anyone with knowledge of Dwayne's location please contact CLM.

Thank you and have a good night!
Posted by Chancey at 8:16 PM No comments: 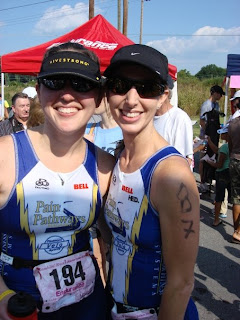 Here are a few pics from the 2nd Annual Winston-Salem Ramblin' Rose Triathlon. This is a women-only event put on by Endurance Magazine. The race was huge, with over 500 participants this year.
Jennifer Fox and Jill Grant raced in the famous blue 'n white kits for PVS. I believe this was Jennifer's first tri, and she really did well. Jill raced this course last year, and beat her previous time by around 4 minutes, so both ladies really showed up to race! 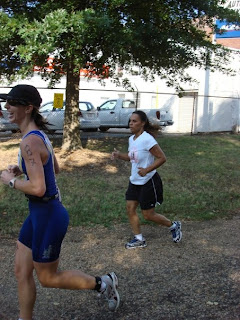 Many team members were able to make it to the ride this morning. We did a slightly diminished version of the Lewisville Metric Century. We also had a few MOB riders, plus Joe, the Man in Pink.

All was peaceful until we started getting to a few rainshowers. The roads became wet, and several riders ditched their water-spotted shades. No fireworks yet, but round mile 30, Kelly Holmes started to ramp it up with his MOB teammate Jerry (?). We closed it down pretty quickly - as there is no other way to close down a Kelly-driver break or you will never see him again - and started rotating between 30 and 34 mph. Whew.

Returning to civilization, we arrived at the base of Powerline hill. I moved to the front in attempts to set a pace fast enough to keep attacks at bay but not so much to be overcooked. About halfway up, I moved off the front while Charlie, Kelly, Jerry, Scott, Joe and Bert rolled through. I missed the kick at this point and a chunk of us were left with a gap to close on those speedsters.

Coming back into Lewisville, I teamed up with Chancey, Richard, Chad, Kevin, and Jimmy to try and close the gap. Of course, if you noticed the names in the preceding paragraph and know those characters, you knew it wasn't coming back. We rolled into Lewisville as separate groups but smiling and happy to get in such a good ride on a drizzly day.

There is talk of a Sunday recovery ride, so watch your email!
Posted by Erich at 8:15 PM No comments:

The Hanes Park Crit took place today. It was only the hottest day of the year but we had new pavement!! Someone smiled on us and they (DOT) paved around West End. The day was a full day of racing leading up to an NRC pro men/women race(s).

The men's cat 4 race went off at 9:30AM and there were around 40 people in the race. The course was great and was actually run with the park to our left. It was nice having the start/finish line around MOB and a few businesses. The best part about it was the numerous shade trees!! The race was good and PVS was well represented with Bob, Pat, Scott, Kevin, Jim, and myself (sorry if I missed anyone). The pace was fast but nothing crazy. The long hill in front of Reynolds High School got troublesome after countless times up it. Our team looked good. There was one wreck during the race with a couple of races going down but nothing major. I decided to take a flyer with three laps to go and attacked at the bottom of the hill. I held on for one lap + but was caught at the hill. I went really hard and blew up. On a side note, I won the Mountain Khaki prime (only to realize it after the race). The pace picked up the last two laps and I barely hung on to the back of the pack. I think all PVSers finished safe and strong. I think 35 people finished our race and I was 33! I'll take it...stayed on two wheels and won a prime! Bring on cyclocross.

Oh, Dr. Rob Payter finished fourth in the men's cat5 race...I think it was his first crit! Sara, Robin, Lynn, Monti, and Beverly raced the women's cat 3/4 race and looked strong. Sara took numerous flyers off the front. Sirena and the MOB girls were in with the PVS women. Sirena finished 10th and was in the money.

Chancey
Posted by Chancey at 6:29 PM No comments:

While everyone is prepping for the upcoming Crossroads Classic races I thought I might post a couple of links.
This one is from bicycling.com. It's an interesting read about Greg Lemond and the author.
http://www.bicycling.com/article/0,6610,s1-3-9-20350-1,00.html
I know there are other wood manufactures out there, but this one is cool too. Charlie should add this to his collection.
http://www.renovobikes.com/
Good luck to all that are racing.
Posted by Mitch at 9:32 AM No comments: