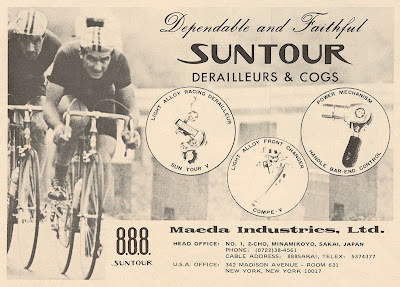 Posted by Charlie at 5:21 AM No comments:

Posted by Charlie at 6:20 AM No comments:

Bicycle Commuting. Is it time for another bicycle boom?

US bike boom of 1965–1975: The period of 1965–1975 saw adult cycling increase sharply in popularity — with Time magazine calling it "the bicycle's biggest wave of popularity in its 154-year history"  The period was followed by a sudden  fall in sales, resulting in a large inventory of unsold bicycles. Seven million bicycles were sold in the U.S. in 1970. Of those, 5½ million were children's bikes, 1.2 million were coaster brake,balloon-tired adult bicycles, and only 200,000 were lightweight 3-speed or derailleur-equipped bikes.  Total bicycle sales had doubled by 1972 to 14 million — with children's bikes remaining constant at 5½ million, adult balloon-tired bicycles falling to about 1/2 million, and lightweight bicycles exploding forty fold, to 8 million. Time Magazine reported in 1971 that "for the first time since the 1890s, nearly one-half of all bicycle production" was "geared for adults."
The boom received a kick start in the mid 60s with the advent of the Schwinn Sting-Ray and other wheelie bikes. Sales reached 4 million units per year for the first time.  At the height of the boom, in 1972, 1973, and 1974, more bicycles than automobiles were sold in the U.S.
Additional factors contributing to the U.S. bike boom included affordable racing bicycles becoming widely available and versatile 10-speed derailleur-geared available, the arrival of many post-World War II baby boomers at adulthood and demanding inexpensive transportation for recreation and exercise, increasing interest in reducing pollution, and the 1973 oil crisis, which increased the cost of driving an automobile, making bicycle commuting a more attractive option.


Following is a list of the bare necessities required to get started bike commuting:
That’s about it. Of course, a person can get much more elaborate if they so choose, but the fact is, bike commuting is a simple activity that doesn’t require much in the way of specialized equipment or training.
Posted by Charlie at 3:25 PM No comments:

Click on the photos to enlarge them
The Gunnar Roadie performed as well as I could hope for on the dirt road. I always enjoy a little bit of adventure like this one. As I was riding back up towards the paved road and the Rockford Bridge when I saw three riders crossing the bridge. They were headed the way I was planning on going. Towards Rockford and the Rockford General Store. I picked up my pace to see if I could catch up with them at the store. I knew the rest of my ride would be much more enjoyable with company.

When I arrived at the store I was glad to see three bikes parked along the store's front porch. I found a place where the Gunnar Roadie would not be likely to be knocked over and headed for a restroom break. The Rockford General Store has been a favorite cycling destination for me for over 20 years. Not to many years ago the owners did a fabulous job of renovating the restrooms. The store offers great food, a wonderful atmosphere and a perfect front porch to take a break on. What more could one look for while on a bike ride? 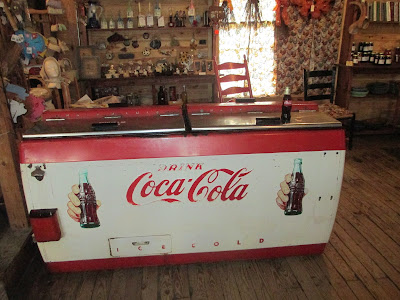 Anytime I go into a store and they have an antique Coca-Cola drink box like this one I have to have a small bottle of coke like the ones picture on the front of the drink box.


I visited with the three other riders that were already at the store when I arrived. I already knew Brian and he intoduced me to Chris and Chuck. They invited me to join them on the rest of their ride. I gladly accepted and we left on our way to Siloam, NC and on towards East Bend, NC. We chatted and they were interested in finding out more about the Gunnar Roadie and the polished Velocity A23 rims. I have to admit, in my opinon the Gunnar is an eye turner.

We rode well together and had a great time. We stopped very briefly at the store in East Bend and then rolled on towards the Flint Hill Road and Old Highway 421 intersection. At the 421 intersection we shook hands and I headed left and the other three went right. It was another 10 or so miles before I was done with my ride. I don't have a computer on my bike (next ride I hope to) but I have ridden this route numerous times over the years and know it to be approximately 65 miles round trip. This was the second ride on the Gunnar Roadie and both of them have been a pure delight. I look forward to my next cycling adventure on this wonderful bicycle!

Today was a day full of winds from all directions. Thankfully the temperature was right around 60 degrees for most of the ride. In the video below Lynyrd Skynyrd performs a song titled "Call Me The Breeze" in 1976. 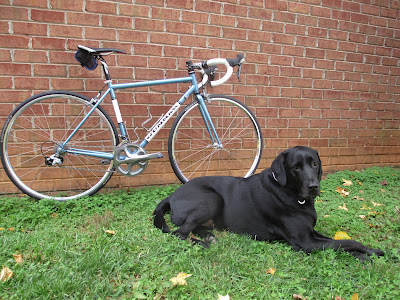 Once my ride was over Poor ole' Joe kept me company while I cleaned up the Gunnar Roadie. I will have to use some soap and water on it next time to clean it up if I take it on any more off road adventures.

Click on the photos to enlarge them
Brian Robinson (1930 Huddersfield, Yorkshire) is a former British road bicycle racer. His career took place mainly during the 1950s and 1960s. He is the first British racer to finish the Tour de France and also the first to win a stage of the Tour.

Robinson began riding with the Huddersfield Road Club at the age of 13. He joined the club as soon as he reached the minimum age of 14 years. His father and brother were already riding with the club. His father would not let him race until he was 18 year old.

His first race was a time trial. The type of racing he wanted to do was mass start races.

The National Cyclists' Union banned all bicycle racing on public roads in 1890. They were afraid it would cause all cyclists to not be allowed to ride on the roads. It required all mass start races to be held on tracks or closed roads such as in parks and airfields. The only races allowed on public roads were time-trials and distance and place to place record attempts. Time trials were held at the very early morning hours and very discretely. Racers were required to wear all black clothing so as not to draw much attention to themselves. The ban on mass start road races went on until the  1950s when the NCU merged with the BLRC (British League of Racing Cyclists).

Robinson raced the Route de France, the amateur version of the Tour de France, in 1952 as a member of the NCU/Army team. He was doing his national service at the time. With only three days to go he was in fifth place overall. He had a tough time in the Pyrennes and finished in 40th place. He said "I had never seen mountains like that before". At the 1952 world championships Robinson tied with Jacgues Anguetil for eighth place.

In 1953 Brian Robinson finished his national service and joined the Ellis Briggs team as an independent or semi-professional. In 1954 he finished the Tour of Britain in 2nd place overall.

Teams consisting of riders from different countries and sponsored by businesses instead of national teams were allowed to compete in the 1956 Tour de France. Robinson joined a team that had the famed climber Charley Gaul on it. Robinson finished the tour in 14th place overall and his teammate Charley Gaul finished in 13th place.

At the 1956 Vuelta a Espana Robinson finished in eighth place overall.

Brian Robinson won the 1957 edition of Milan-San Remo. This was his first win as a professional bike racer. Unfortunately at the 1957 Tour de France he crashed on wet cobblestones and injured his wrist. The wrist injury prevented him from finishing the 1957 tour.

At the 1958 Tour de France Brian Robinson became the first Briton to win a stage. He won the seventh stage. Arigo Padovan actually crossed the finish line first, but was relegated to second place for dangerous sprinting.

Robinson won another stage of the Tour de France in 1959. This time he won the 20th stage by a margin of 20 minutes. This put him in 9th place overall in the general classification.  The next day he suffered for his stage winning efforts and finished outside of the time limit and expected to be eliminated from the race.  He was saved by the rule that any rider in the top 10 places would not be eliminated for falling outside of the time limit. At the end of the 1959 Tour de France Robinson finished in 19th place.

At the age of 33 Brian Robinson retired from professional racing.

Posted by Charlie at 8:17 PM No comments:

Click on the photo to enlarge it
Posted by Charlie at 7:08 PM No comments:

Posted by Charlie at 6:46 PM No comments:

Fiorenzo Magni - One of cycling's all time greatest riders passed away October 19, 2012 at the age of 91


This video shows Forenzo Magni Racing. Click here to learn more about him.
Posted by Charlie at 9:04 AM No comments: 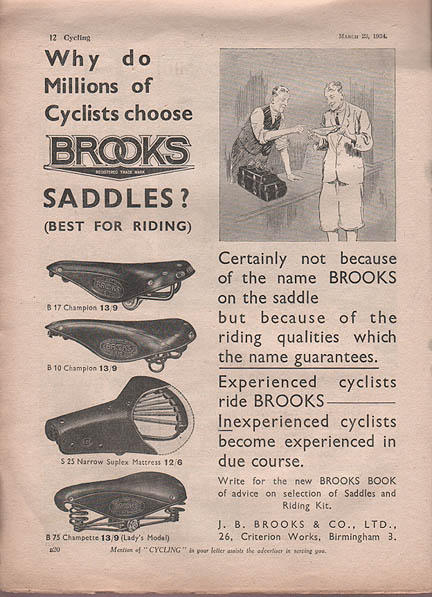 Posted by Charlie at 5:09 AM No comments:

Click on the photo to enlarge it
Click here to listen to Amy Snyder on the WAMC Roundtable.
Click here to visit the Race Across America web site.
Posted by Charlie at 10:15 PM No comments:

A road bike with fenders

Posted by Charlie at 7:23 AM No comments:

Rene Vietto (1914 - 1988) was a famous French road racing cyclist. He is considered by many as the best pure climber that France has ever produced. Vietto became a legend at the young age of 20 years old for his performances and sacrifices during the 1934 Tour de France.

During the 1934 Tour de France Rene Vietto won 4 stages; stages 7,9,11 and 18. He also won the mountains classification for best climber and finished in 5th place overall in the general classification.

Click on the photos to enlarge them
There never seems to be time enough. Time enough to go for a bike ride with the work schedule and everything else that has to be done. Having lights on a bike helps to extend the day, but a safe  place to ride is sometimes difficult to find. I got in a nice little ride tonight at an industrial park near my house. There isn't much traffic and it's 1.9 miles per lap. The Gunnar Sport is equipped with two head lights and one bright flashing rear red light. I didn't see more than three cars the whole time I was riding, so enough light to see the road and to be seen was all I needed. This wasn't as much fun as riding one of my favorite routes in daylight, but it was a better than nothing. 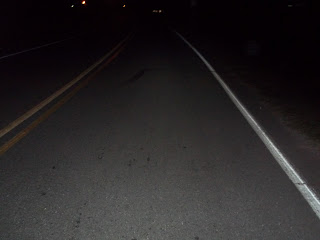 This picture is misleading. I had plenty of light and there are enough street lights in the industrial park that I could see where I was going without any lights at all. In the above picture you can see that I had enough light in front of me to see any imperfections in the road's surface.

Below are three videos of The Twilight Zone featuring Burgess Meredith. This episode is titled "Time Enough At Last".

The Twilight Zone is a television series created by Rod Serling. The original series ran from 1959 to 1964.
Posted by Charlie at 9:29 PM No comments: